For those of you who have followed my blog you will know that I deal with Log Insight quite a bit in our production environments. Because of this I was excited that in the latest release of Log Insight 3.3 there are several new Configuration API's released under Tech Preview status. That said, the documentation around these APIs is very difficult to nail down. The exciting part is that I've just uploaded a new and unofficial standalone audit and remediation tool to my github repo! As always this code is my personal code and not supported or officially recognized by VMware.

Let's see it in action:
First up, let's pull up the embedded documentation by running the script with the -d switch to see what the JSON file needs to look like. I've taken pains to try and include complex examples so that you won't be left in the dark on anything. After creating a new JSON file with our desired state it's time to run the tool in audit only mode by just specifying the -f flag and the name of our JSON file. The results that come back are that we have several areas that need remediation (email, event forwarders) and 1 (content packs) that cannot be remediated yet (hopefully in a later version). 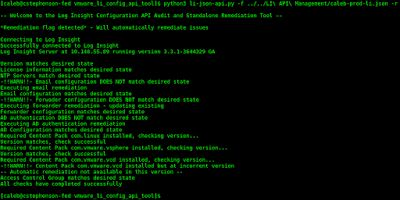 If you run the tool again the output comes back as all objects matching desired state but the nice thing is that you don't need to run it again. Once the remediation HTTP POST is sent to the server the tool will automatically go back and query the server for the configuration to verify that your changes have been implemented and the server is now set correctly. It will then show you success in the message immediately following the remediation step.

Stay tuned as I plan on updating the tool over time as more APIs are released and as my python knowledge increases. In the meantime happy auditing and automatic remediation!

Caleb
CO, United States
I am a Sr. Site Reliability Engineer working on the VMware Private Cloud Team at VMware and specializing in Systems Management and Automation. We make cloud computing happen at scale. If you have attended VMworld 2013-2015 in the US or Europe and took Hands-On-Lnbs or did HOL for another event that is just one of the many things that we host using VMware products. I am a jack of all trades and master at none. My various IT certifications include VMware Certified Professional (VCP), Certified Scrum Product Owner (CSPO), ITIL-F, RHCSA (RHEL 7), MCSA 2003, MCSE 2003, MCTS - Vista and MCITP Enterprise Support Technician. I love using open source software and am a DBA at heart... Everything on this blog should be considered mine personally and not representative of my employer. There may be stuff published here that is pertaining to VMware products or product issues/fixes or bits of code I wrote. My blog should be read just like any other blog and not as a representative of VMware in any way, shape or form.